Get me outta here!

In the last post I’ve talked about how to conjugate 99.999 % percent of all German verbs in present tense… and today we are going to deal with the remaining 0.001%. This post is divided in 2 parts:

The 3 German Verbs for “to know”

Yes, there really are 3 German verbs that can be translated as “to know” in English!!! The two main German verbs that mean “to know” are ,,kennen” (“to know a person, be familiar with”) and ,,wissen” (“to know a fact, know when/how”). A third verb, ,,können“, is a modal verb that express the idea of knowing how to do something. Often such sentences can also be translated using “can” or “is able to”.

Knowing PEOPLE or being familiar with things. 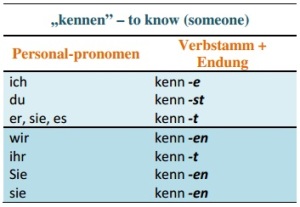 Although it is not a modal verb, the conjugation of the irregular verb wissen follows the same pattern as the modal verbs.

knowing HOW to do something. 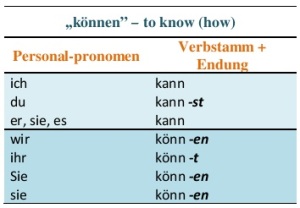 Usually used with languages, implying someone “can” speak, read, write and understand it. Otherwise limited to “can” or “to be able.”

Next time, I will talk about Modal Verbs in German.
Till then take care. 😉

One thought on “die Verb-Endungen – Teil 2A”